Here at Phuket Scuba Club we specialize in diver education. Our multilingual staff has earned recognition from PADI Headquarters for our “Award Winning Instruction”.

We offer great day rates for the rental of our quality dive equipment. A qualified technician regularly services all our equipment.
If you are planning a liveaboard trip or multiple daytrips we can arrange a package price to meet your needs.

We conduct daily dive trips to all of the local Phuket & Phi Phi Island sites. Overnight scubadiving trips around Phuket and the Phi Phi Islands with accommodation offer a great adventure activity for the whole family. Day trips for scuba diving in the Similan Islands are possible. For more adventurous divers we have liveaboard diving to the Similan Islands, Surin Islands located to the north of Phuket and Hin Daeng/Hin Muang located to the South of Phuket.

Diving enthusiasts flock to the Thailand Coastline for a glimpse of beautiful coral reefs and exotic marine life that open a whole new dimension to the Andaman Sea. Today, it is regarded by knowledgeable travelers as one of the world’s most desirable destinations for diving, snorkeling, or just enjoying the sun, sand, and sea.

We at Phuket Scuba Diving are proud to offer voyages to diving sites from the popular to the unexplored. We combine excellent service with a remarkable value to make our trips exceptional and unforgettable. Explore our interactive map to find out more about the incredible locations offered.

We offer the full selection of PADI Courses from the Introductory Course for beginners, a complete list of Specialty Courses for Advanced divers who choose to become Master Scuba Divers. For those who would like to enter the diving business professionally we offer the Divemaster, Assistant Instructor and the PADI Instructor programs while visiting us in Phuket, Thailand.

Let us design a personalized program that fits your individual needs and schedule. Don’t be just another face in the crowd. A private one-on-one or the whole family can be accommodated with our executive programs. Our team of multi-lingual dive educators truly believes that your diver development and comfort comes first.

LEARN WITH THE BEST!
Use the ‘QUICK-LINKS’ on the right to find information about the course of your choice. 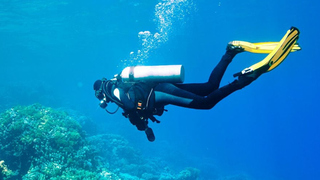 Phuket Scuba Club offers PADI Courses from Discover Scuba, Introductory Dive up to PADI IDC. Dive Sites around Phuket such as Shark Point, Anemone Reef and Phi Phi islands with Day Trips and Liveaboards Cruises to Similan Islands, Surin Islands and Richelieu Rock are some of the best that Thailand Diving has to offer in the Andaman Sea. Adventure Tours, Hotels, Beach Resort and Private Diving & Snorkeling Boat Charters are a specialty with Phuket Scuba Club. Our Multilingual Guides & PADI Instructor Team are here to help you with your Phuket Diving Holiday.

Experience the fun of scuba diving!

We offer a wide array of diving activities, from PADI Scuba Diving courses to daily boat dives. We are completely stocked will all necessary equipment for snorkeling, scuba diving, night diving, and fishing adventures. Our staff is highly trained and operates according to strict international diving requirements.

The commitment of Phuket Diving Center is the to offer unrivaled prices to our guests without compromising the top quality of service. Our philosophy is to provide complete satisfaction to our guests, both in our facilities and our services. We can do this because we own the entire operation, which means we don’t have to pay expensive rental fees to a third party. These savings get passed along to you.

A bridge to Southern Thailand on the Andaman Sea coast connects Phuket Island.
Surrounded by 32 smaller islands that form part of Phuket province. Its size is about 570 square kilometers (widest point 21.3km, longest 48.7km) and about 70% is mountains. The highest point of the island is 529m.

You may fly from your home country to Bangkok, the capital city of Thailand, or to neighboring countries such as Malaysia or Singapore. A connecting flight to Phuket takes about 1 hour from Bangkok or about 2 hours from Singapore. If you prefer to come by road, there are several different types of buses available and traveling time varies between 14 hours via VIP express bus or up to 20 hours via local buses.

Economy
Tin mining used be the majority of income, however agriculture, such as rubber, coconuts, cashews and pineapples remains important to large number of people. Since 1980’s, the tourism industry has become the number one income in Phuket province. Phuket Province residents enjoy the highest standard of living in Thailand.

Language
Thai is the official language with a southern accent, of course, but English is widely spoken in Phuket.

Climate
Phuket has a moist, tropical climate, influenced chiefly by monsoon winds that vary in direction according to the season. From March to September, as the sun’s rays strike directly above the equator, the landmass of Asia is heated more than is the Indian Ocean. This draws moist hot air from the ocean over Phuket and southern Thailand, bringing the rains of the southwest monsoon. By mid-April the winds are mainly from the southwest and are heavy with moisture. From the middle of December until the beginning of May we enter the high season for diving in Phuket. Gentle winds and temperature during this time and no rains produce ideal diving conditions.

Transportation is available from Phuket International airport to the major hotels and districts. (Or we can arrange your airport transfer in advance.) While you are in Phuket, if you like to drive around by yourself, we have rental cars and motorcycles. We can arrange chauffeur driven minivans with onboard television so you can download or playback your cameras from one activity to the next. If you prefer other means of transportation, the local version of a small open taxi is called a Tuk-Tuk and motorcycle taxis are also available. You just need to negotiate the price before you ride. The local bus is called a Songthaew. They run every 30 minutes to 1 hour between Phuket town to the main beaches.

While not diving in Phuket we can arrange your day activities and tours as well as evening entertainment, click here for a complete list of activities and adventure tours, discounted accommodation packages and transfers.

Send us an e-mail in advance and our experienced staff will assist you with all of your vacation plans.

Catch up on the latest news from Phuket Scuba Club